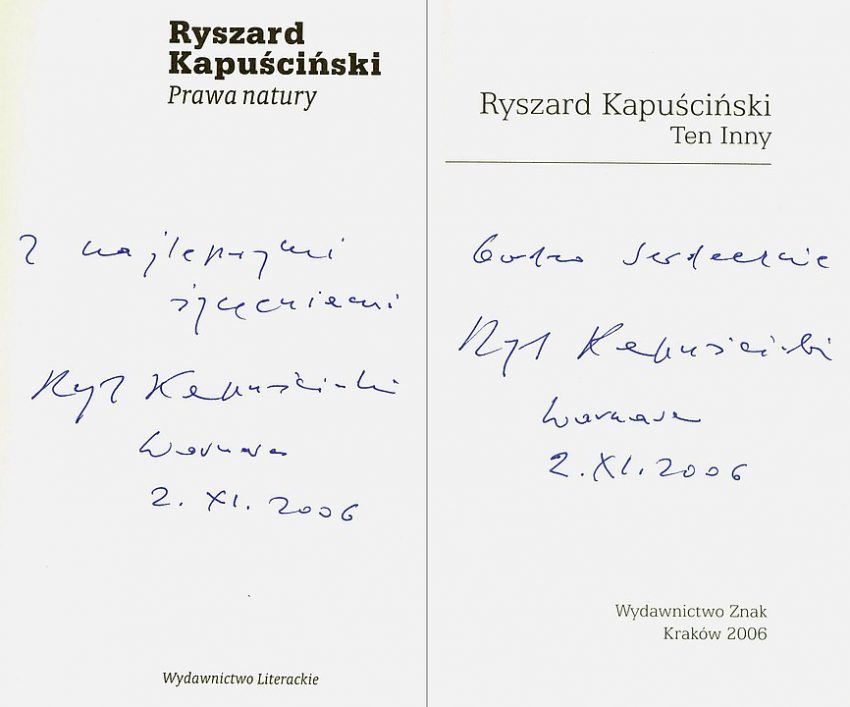 Among many famous Polish reporters there is an outstanding one – Ryszard Kapuscinski. He was born in Pinsk in 1932 and during his life he embarked on numerous trips around the world. He developed his writing skills on domestic stories, yet shortly after he decided to travel and report on important events from different parts of the globe. He wrote insightful reportages on dozens of wars, coups and revolutions in America, Asia, and Africa. It was there where he witnessed and described the decline of colonialism. In his literary legacy one finds also quite a number of books devoted to Africa, including the latest, Ebony, soon to be published.

In the 1970s Kapuscinski wrote an thought-provoking series of books presenting deep psychological portraits of selected characters and unconventional metaphors and imagery which was a key to properly interpretate the presented world; all of them were well-written, proving his increasing mastery in the subject. All of these were highly appreciated by the audience. The Emperor – one of the most important and well-known books of Kapuscinski – is a reportage-novel that discusses the final stages of Haile Selassie’s regime in Ethiopia. The book was a worldwide success, having been transated into many languages. Another book that also gained such a popularity is Shah of Shahs. It treated about the last Shah of Iran, as well as his imperium, just before the collapse of the Soviet Union.

To become such a great reporter he had had thorough preparation before each of his trips. He used to engage in foreign cultures first by their literature, which he had been reading for months preceding the travel.

He was a master of listening to people, but also finding the true, hidden meaning of people’s stories. No matter if the story concerned fleeing from Angola by European people, sharing alimony in the parliament of Tanganika or reconstructing frescoes in the new Russia – each of these circumstances was a chance to him to metaphorically

present important changes in the world. He is also the author of three-volume Lapidarium, which are a true evidence of his capability to perceive the reality philosophically and reflectively. He mastered synthesizing his thoughts and experiences into a meaningful, eye-opening, universal pieces of writing.

The reconstruction of frescoes in the new Russia, the way that the Europeans move out of Angola, a discussion about alimony in the Tanganyikan parliament – he was able to change all of these headpieces and more into a metaphor of historical transformation. He also wrote three volumes of Lapidarium that are a fascinating record of the shaping of his reporter’s observations into philosophical reflections on the world and people. He became a specialist in turning private adventures into a synthesis.